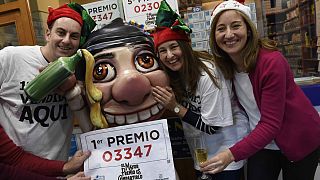 Spain's Christmas Lottery draw started at 0815 GMT on Saturday, (December 22), at the Royal Theatre in Madrid. Hundreds of people, many of them wearing costumes, had queued outside since early morning to attend this annual event.

The Second Prize winning number of the Christmas Lottery draw came out early. Pupils of Madrid San Ildefonso School scooped the cash, just some minutes after the draw started.

Every year millions of Spaniards club together with friends, family or co-workers to each buy fractions of the same ticket in the over 200-year-old lottery, which, on winning numbers, pays out 400,000 Euros for every 20 Euros wagered.

Millions of people stay glued to TV screens for hours as schoolchildren pluck lottery balls from a rotating drum, singing out the resulting numbers.