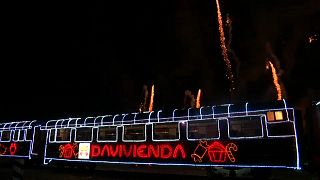 Families traditionally enjoy the comforts of home during the Christmas season as children await the arrival of Santa Claus. Residents of Bogota, however, can see Santa pass by on an illuminated Christmas through the Colombian capital.

Four hundred metres-long (1,312 feet), and comprised of 14 cars, the lit-up locomotive makes use of travel infrastructure that has been out of commission in Bogota for more than three decades.

The holiday express can carry up to 600 tourists at a time, a quarter of which tend to be foreigners.

Santa Claus passes cabin to cabin, visiting passengers as the train chugs along. Santa and his helpers hand out gifts to good girls and boys, while many passengers pose for photos with the train-travelling Old St. Nick.

The train follows a route through the South American capital leading to Bogota's popular attraction - the Salt Cathedral of Zipaquira.