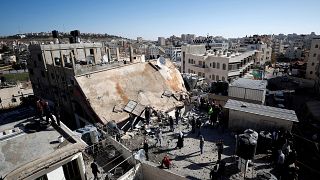 Israeli forces on Saturday (December 15) demolished the family home of a Palestinian charged with killing an Israeli soldier in the occupied West Bank, the military and witnesses said.

Israel claims 32-year-old Islam Abu Humaid threw a marble block from a rooftop, killing an Israeli special forces sergeant, Ronen Lubarsky, 20, during a May arrest raid in Al-Amari refugee camp in the Palestinian city of Ramallah.

Israeli forces arrived at the Al-Amari camp at dawn on Saturday, sealed off the four-storey Abu Humaid house and razed it to the ground with explosives.