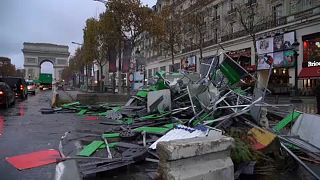 Violence erupted yesterday on the Champs-Élysées as police clashed with yellow vests protesters reportedly infiltrated by the far right, and gendarmes and riot police used teargas as well as water cannons to disperse the crowd.

The authorities had banned the “gilets jaunes” from gathering at a certain site, hoping to contain what was supposed to be a peaceful protest.

Calm returned to the streets of the capital after midnight on Saturday, with the Champs-Elysées reopening to traffic.

The clean-up operation also got under way as garbage trucks were deployed and workers removed barricades along the famous avenue.