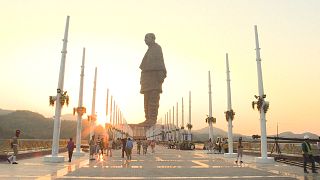 The 182-metre (597-ft) steel and bronze "Statue of Unity", in the prime minister's western home state of Gujarat, is part of his Hindu nationalist party's efforts to re-brand what it calls "forgotten" leaders.

Modi, who ordered the statue built on the Narmada river when he was Gujarat chief minister, said last year there had been efforts to "belittle" or "remove from history" the contributions of Patel, who helped unite India's 562 princely states as the first home, or interior, minister.

Depicting the bald Patel in traditional attire, with a shawl over the shoulders, the statue used 210,000 cubic metres of cement, 25,000 tonnes of steel and 1,700 tonnes of bronze. Some political commentators have criticised Modi for his expenditure on the statue complex at a time when the Adivasi indigenous people who farm the land acquired for it are in economic straits and have protested against it.