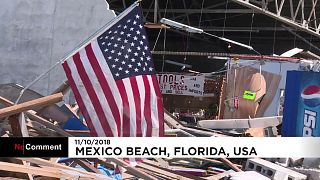 Search and rescue teams pick through the aftermath of Hurricane Michael

Search and rescue teams combed through shattered US communities on Thursday looking for victims of Hurricane Michael, a Category 4 monster storm which carved out a swathe of destruction in the Florida Panhandle, killing at least six in three states.

In Mexico Beach, a seafront town where the hurricane made landfall, houses had been razed by storm surge, boats had been tossed into yards and the streets were littered with trees and power lines.

Florida Governor Rick Scott said the storm had caused "unbelievable devastation" and the priority for the moment was looking for survivors among residents who failed to heed orders to evacuate.

"I'm very concerned about our citizens that didn't evacuate and I just hope that, you know, we don't have much loss of life," Scott told ABC.

The US Army said more than 2,000 Florida National Guard soldiers were working on the recovery operations.

There have been six confirmed storm-related deaths so far -- four in Florida's Gadsden County, one in Georgia, and one in North Carolina.