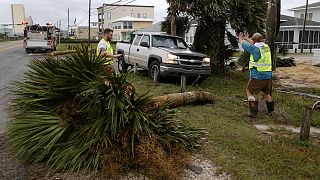 Hurricane Michael hit the Florida Panhandle on Wednesday, October 10 with the threat of catastrophic surges of sea water and roof-shredding winds.

The wall of the storm's eye began coming ashore between St. Vincent Island and Panama City, Florida at about 13:00 local time (19:00 CET), the National Hurricane Center said, with full landfall expected soon after.

Michael was carrying winds as high as 150 mph (241 kph), making it a dangerous Category 4 storm on the five-step Saffir-Simpson scale. The storm could drive sea water levels as high as 14 feet (4.3 meters) above normal in some areas, the hurricane center said.

Michael had caught many by surprise with its rapid intensification as it churned north over the Gulf of Mexico. It was expected to be the worst hurricane ever recorded in the region.