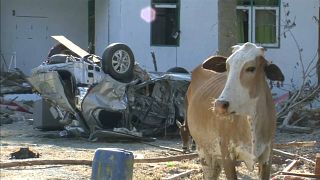 The provisional death toll from Friday's 7.5 magnitude earthquake and the subsequent tsunami waves in Indonesia climbed to 844 and was sure to rise as rescuers reached devastated outlying communities.

Dozens of people were reported to be trapped in the rubble of several hotels and a mall in the small city of Palu, 1,500 km northeast of Jakarta. Hundreds more were feared buried in landslides that engulfed villages.

Of particular concern was Donggala, a region of 300,000 people north of Palu and close to the epicentre of the quake, along with two other districts where communication had been cut off.