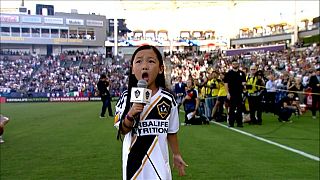 A seven-year-old girl went viral on Sunday (September 23) with her performance of the U.S. national anthem before a LA Galaxy game.

Malea Emma Tjandrawidjaja was introduced to fans as a "tiny but mighty" performer before the team's match with Seattle Sounders FC.

She promptly delivered a powerful rendition of "The Star-Spangled Banner" with subsequent videos going viral on social media.

After the 3-0 win for LA Galaxy, striker Zlatan Ibrahimovic tweeted: "MVP of the game!".