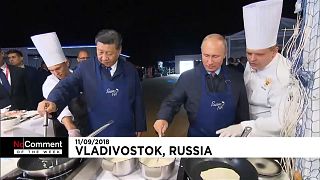 From political pancakes, to an impressive aurora and an Olympic sprint, we take a look back at five of the best videos from this week's No Comment section.

Hundreds of amateur and professional dancers gathered in Paris on Sunday to perform “Kadamati” by British choreographer Akram Khan in a World War I tribute.

In Finland’s northern city of Rovaniemi, an impressive Northern Lights display was captured on camera on Monday, marking the start of what is expected to be a good season for aurora watching.

Russian President Vladimir Putin and his Chinese counterpart, Xi Jinping, demonstrated their cooking skills on Tuesday, after their talks in Russia's eastern city of Vladivostok. With kitchen aprons on, the pair fried traditional Russian pancakes and tried them with seafood delicacies along with shots of vodka.

A traffic police officer was caught on camera on Wednesday using unique moves to control traffic in India’s eastern city of Bhubaneswar. Pratap Chandra Khandwal developed the technique four years ago to make people pay attention to the traffic rules.