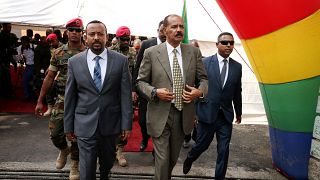 The two opened the border post at the Serha-Zalambesa crossing, after visiting the Bure Front.

Footage showed Abiy in camouflage alongside Isaias, while hundreds of civilians lined a road with the countries' flags in hand.