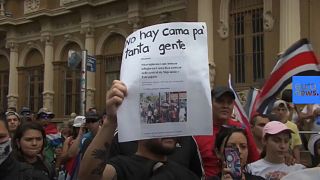 Hundreds of Costa Ricans marched on San Jose on Sunday (September 02) to protest against the arrival of migrants from neighbouring Nicaragua, who are fleeing instability and violence during widespread protests against President Daniel Ortega.

According to the Costa Rican government, about 100 to 150 Nicaraguans are crossing the border between Costa Rica and Nicaragua. San Jose has sought international help to deal with the influx.

Some Costa Ricans do not want Nicaraguan migrants coming into the country, complaining there are not enough jobs for those arriving.