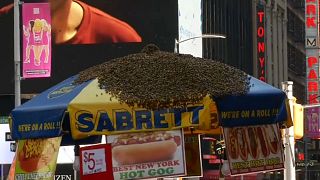 A street was closed off by police after around 30,000 bees descended on a hotdog stand in New York City.

It is unclear as to why the tens of thousands of bees chose to swarm around the stand.

The street near Times Square was later cordoned off, allowing a beekeeper to collect the insects.

One onlooker described the scene as the "craziest thing" he had ever seen, while another called it "a bit scary".