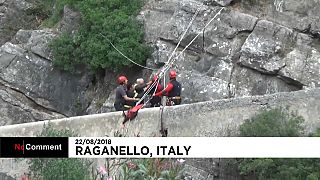 Watch: Rescuers in Italy search for survivors of flash flood

Eleven were hospitalised, including four children who either lost one or both parents in the natural disaster.

The waters of the flash flood reached a height of 2.5-metres and filled the Raganello gorge in Pollino National Park, sweeping tourists along the rush of water.

The Raganello gorge is a popular location among hiking enthusiasts.

Addressing pilgrims at his weekly address at the Vatican, Pope Francis expressed his sorrow Wednesday for “the tragedy, happened in the last few days in Calabria, near the stream of Raganello”.