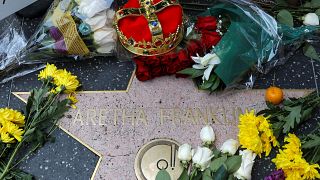 A critically endangered rhino was born in Chester Zoo in England. The Eastern black rhino calf was a triumph for conservationists, who are worried that the species may become extinct. There are less than 650 of the species left in the world.

A festival dedicated to twins and triplets occurred in Kiev, Ukraine.

British politician Boris Johnson arrived home from holiday amid controversy over comments he made about burkas. Johnson wrote in a newspaper column last week that Muslim women who wear burkas look like letterboxes or bank robbers.

Thirty-nine people died and dozens were injured when a bridge collapsed in Genoa, Italy. The incident shocked the world and an investigation is underway as to the cause of the disaster.

Vocal superstar Aretha Franklin died aged 76 on Thursday, prompting fans around the world to pay tribute to the Detroit-native. The 18-time Grammy Award winner was diagnosed with pancreatic cancer in 2010.