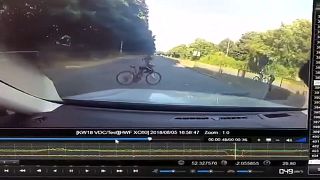 An English fire department has released footage of a near-miss collision with a child on a bike on Sunday (August 5) to remind cyclists to ride safely.

Group Commander Robert Allen of Hereford and Worcester Fire & Rescue Service, who recorded the video on the A38 near Bromsgrove, said in a tweet he was initially hesitant about releasing the footage but believed the dramatic footage of the near miss would warn cycylists to and help them to stay safe.