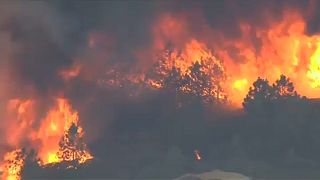 The largest wildfire in California's history

The Mendocino Complex fire became the largest wildfire in Californian history on Monday as it raged at the southern tip of the Mendocino National Forest.

The Mendocino Complex Fire, which has destroyed 75 homes and forced thousands to flee, is the largest of eight major wildfires burning out of control across California, prompting US President Donald Trump to declare a "major disaster" in the state.