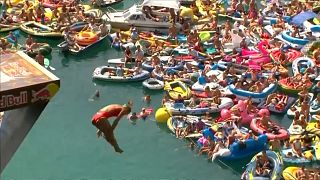 Scores of fans gathered on the picturesque Lake Lucerne in Switzerland to watch divers jump from a great height in the Red Bull Cliff Diving World Series.

The fourth stop of the year's tour saw Britain's six-time champion Gary Hunt and Canadian mother of three Lysanne Richard return to the top of the podium.

The next men's event takes place on August 25 in Copenhagen, Denmark, whilst the women return on Bosnia's historic Mostar Bridge on September 8.