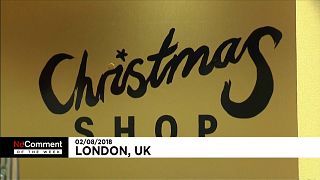 Paragliders compete and Christmas comes early: No Comment of the week

From shocking sports to amazing architecture and an early Christmas, we take a look back at four of the best videos from this week's No Comment section.

Europe's top paragliders took to the skies in Montalegre, Portugal, on Saturday for the 15th installment of the European Paragliding Championship.

Elsewhere in Southeast Asia, tourists rushed to Vietnam's "Golden Bridge" in the Ba Na Hills on Tuesday. The 150-metre-long walkway has grabbed attention since opening in June because of its distinct design, in which the gold bridge appears to be held up by two giant stone hands.

Back in Europe, Christmas came early for shoppers in London on Friday, as department store Selfridges opened its festive shop in the middle of a heatwave.