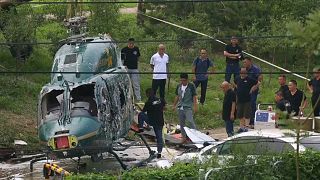 According to eyewitnesses, the helicopter hovered in what looked like an uncontrolled way around 11:00am before crashing. The body of the helicopter and its tail rotor separated upon impact.

All four people on board were said to have climbed out of the wreckage. No casualties were reported on the ground, and the injured have all been sent to the hospital for treatment, with no life-threatening injuries.

The helicopter was for civil use and crashed while making a forced landing due to an unknown malfunction.