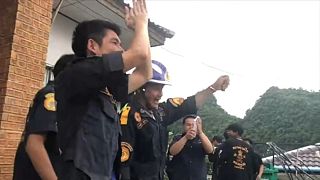 Volunteers assisting in the rescue of a football team and their coach from a flooded cave in Thailand react as the last person is stretchered out.

The boys, aged 11 to 17, and their 25-year-old instructor became trapped underground on June 23 after heavy rains flooded chambers in Tham Luang cave.

Saman Kunan, a 38-year-old former SEAL, died on July 5 while aiding in the perilous rescue mission.