Three-and-a-half years ago, the €315bn European Fund For Strategic Investments – or EFSI was unveiled. The target - to kickstart a flagging investment environment.

So is the plan working?

Well, the bulk of financing from EFSI until now has gone to projects in Research and Development and to small and medium enterprises - but the investment levels in innovation and infrastructure are still far, far below pre-crisis levels. So the plan has received an upgrade.

It is still based on the principle that every one European Fund Euro, can be leveraged to 15 euros of investments. The Fund will now pump €26bn from the EU budget and €7.5bn from the European Investment Bank.

It is this leverage ratio that the European Investment Bank which manages EFSI swears by, that’s seen healthcare, internet access and renewable energy projects get financed in countries such as Spain, Portugal, Poland or Estonia.

So Guillaume Desjardins went to Spain to get a reality check whether this financing is really helping innovation to get off the ground.

Despite a recent-and timid improvement, issues related to access to credit remains sky high for businesses in Spain. Notwithstanding the €6.5 billion of investments already approved by EIB.

Critics are quick to point out that big projects, with relatively easier access to credit, seem to be the big winners.

Carlos Mancholas, Group director of finance & IT, SAICA, says: "We know the officials, and we knew they would be interested in this kind of project. The EIB fits very well with our philosophy."

At SAICA, the fresh funds have allowed the company to develop new cleaner recycling technology as well as creating new jobs.

Mancholas adds: "We created with this project with about 120 permanent jobs, and also during the construction phase, we created 500 employees."

The European investment plan has allowed SAICA to develop even more, but the company was actually already the market leader with factories all across Europe. For Exovite, however, a local startup specialising in medical supplies of the future, it made all the difference. 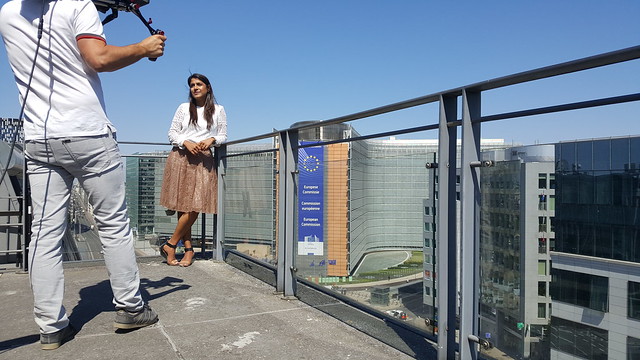 For Juan Monzón, head of Exovite: "The problem was you don't have anything to cover our loan and we can't do anything."

The €300,000 it received from the EIB helped to develop a prototype and double staff. But it wasn't easy.

According to Jorge Alonso, director of international relations, CEOE Aragón: "The small companies work through intermediary institutions. Sometimes, they are not aware that the money, the funds are coming from the EU, they believe that it is a local bank providing the loan."

Is this the direction Europe will take? Better streamlined process and better visibility towards entrepreneurs.

So how do projects or companies like the ones Guillaume just showed us, access that financing? here is the not so secret...way!

The European Fund for Strategic Investments allows John, Katie and Simone to showcase their ventures for investment.

Private sector John and Public Sector Katie have large projects with more than 3,000 staff. Simone’s is a small business, so her company’s audition is scheduled in front of judges from National Promotional Banks.

John & Katie first audition in front of EIB staff who assess if they’re viable. If they pass that check - the audition moves to the EIB’s Investment Committee.

Two criteria must be met for the project to go live:

Is it too risky for anyone else to finance?

And does it fill a major gap in the market and is additional to anything else the EIB is funding.

If the committee says yes –John and Katie can use the EFSI vetting and funding to help raise more money by convincing other investors of their project’s viability.

Simone follows a similar process but with her local bank or financial institution, who are given EFSI funds to help small companies like hers.

But is the plan is actually having its intended impact – so Jyrki Katainen, Vice president of the European Commission joined Euronews for our annual check on Europe’s Investment Plan.

Maithreyi Seetharaman: So tell us what you’ve brought as the real stuff to show us what EFSI is doing now?

Jyrki Katainen: "One example is this social impact bond project. It’s co-financed by EFSI, the private sector and government of Finland and its aim is to provide jobs for 2,500 migrants in Finland. I wanted to raise this issue because this is slightly different than normal EFSI investments - which are in SME financing, or industrial projects, or infrastructure.

Maithreyi: "So when you talk about EFSI and migrants, it also brings up the question about employment for Europeans. Three hundred thousand is the number being thrown around.

Katainen: Three hundred thousand jobs is based on EFSI investments done until the end of 2016. So the current figure is bigger. In terms of business area – 640,000 European SMEs have got financing. They are in tourism they are in digital but also there are larger projects.

Maithreyi: "It brings up a question of transparency.. that the EIB still doing business with old clients, people they know - so who’s got oversight?'

Katainen: "EFSI has provided guarantees only to European investment bank. Now we are concentrating on invest EU fund which is slightly different than EFSI and we try to learn a lesson from EFSI how we could improve, for instance, in transparency. Invest EU promotes investments in stainable infrastructure, in SMEs, R&D and social infrastructure. But in the ‘Invest EU fund’, the EIB will stay as the key, implementing partner, but we will open the EU guarantees for the other national promotional banks.

Maithreyi: "Again, who has oversight about the projects chosen? Who is going to do the checks and balances – and what about R&D funding that comes through the EU budget? Is this now going to all be about loans and guarantees and forget about the funding?"

Katainen: "The financial institution, which at the end of the day provides the financing, is responsible for checking whether the project is economically viable."

Maithreyi: "Does it reduce the budget for the …"

Maithreyi: "So there is hope…"

Katainen: "The market is improving luckily in many countries but still there is a need for SME financing especially in innovations.

Maithreyi: "On that note, Vice-President, thank you so very much for joining us on the show

Katainen: "Thank you very much