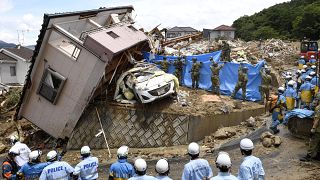 Search and rescue efforts are continuing for those still missing in Hiroshima following heavy rainfall that has hammered southern Japan for a third day straight.

Japanese broadcaster NHK reported that 88 people had died and 58 remain missing as of Monday morning.

Shoto Ishida, who lives by the Seno river which runs through Hiroshima city, said the disaster is putting local residents "in a panic" as they are not used to natural disasters of this scale.

The Japanese government has set up an emergency office designed for crises such as major earthquakes.