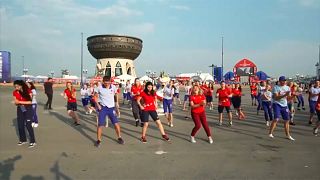 FIFA volunteers in Kazan took part in a flash mob on Tuesday (July 3) as the last game of the host city approaches.

Around 80 local and international volunteers, who learned the choreography over the past week, danced during the official song of the World Cup.

Kazan will host its last game on Friday (July 6), where Brazil and Belgium will battle for a place in the semi-finals.