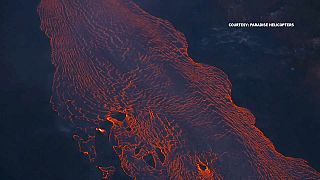 The lava, which has covered more than 2023.47 hectares in this latest eruption is not only expansive, but very thick.

Scientists said that while the height of the lava is variable depending on the source and local topography, much of the area is covered in three to six metres of lava.

People that have private property in the affected areas will still own their land, though it will need to be reassessed once the lava stops flowing.