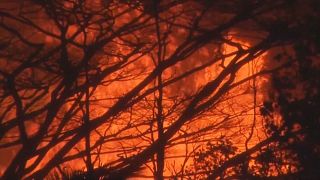 Dramatic video taken on Tuesday night (June 5) showed the area near Kapoho Bay on Hawaii's Big Island illuminated orange by spewing molten lava from what has been called the "fissure 8".

A growing river of molten rock flowing from the fissure at the foot of Kilauea Volcano is believed to have demolished scores of homes and filled in a small bay at the eastern tip of Hawaii's Big Island, civil defence officials said on Tuesday.

The latest estimates — up to 80 more structures than previously counted as destroyed by lava smothering two newly evacuated subdivisions — could bring the total number of homes and other buildings lost over the past month to nearly 200.