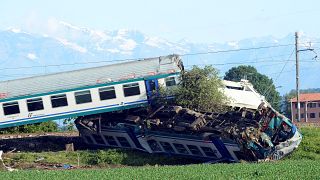 Formula 1 drivers Daniel Ricciardo and Max Verstappen participated in an unusual caravan race on the Dutch circuit of Zandvoort.

A road rage suspect who hit a man with a sledgehammer has been captured on CCTV by Philadelphia police.

Two people died after a train hit a truck stopped on the tracks near the northern Italian city of Turin.