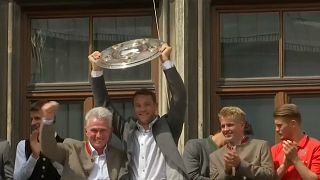 Bayern Munich returned home on Sunday to celebrate winning the Bundesliga championship, but without having taken home the German Cup on Saturday.

Fans gathered in central Munich's Marienplatz square where the team gathered on the town hall balcony.

It was a bittersweet farewell for Bayern's Heynckes, who will go back into retirement after taking over in October and leading them to their sixth straight Bundesliga title. Heynckes had coached them to the treble in 2013.