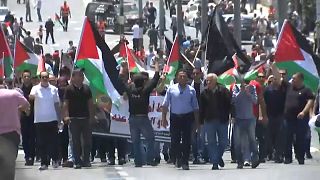 It comes the day after Israeli forces killed 58 Palestinians at a mass protest at the Gaza border, most by gunfire, and injured more than 2,700, according to Gaza health officials.

Tuesday also marks the 70th anniversary of what Palestinians call their "nakba," or catastrophe - the uprooting of hundreds of thousands in the Mideast war over Israel's 1948 creation.