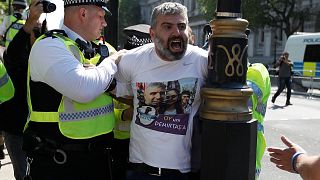 Clashes between pro- and anti-Erdogan protesters in London

Scuffles broke out between two groups of protesters and police outside Downing Street, ahead of Turkish President Recep Tayyip Erdogan's meeting with Prime Minister Theresa May later in the day.

Police used batons to bring the situation under control and made at least three arrests.

Erdogan arrived in the United Kingdom on Sunday for a three-day visit.