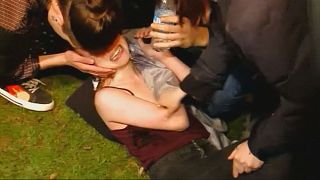 Hundreds gathered in the centre of Georgia's capital Tbilisi on Saturday (May 12) to protest against armed police raids on two nightclubs and to demand the resignation of the country's prime minister and interior minister.

Police arrested eight people on Friday (May 11) night in two popular clubs, Bassiani and Cafe Gallery, on suspicion of drug dealing. They briefly detained dozens of clubbers in what protesters said was a heavy handed operation.

"The interior ministry has been conducting intensive investigative measures for the last three months to establish the facts of the drug trade in Bassiani and Gallery nightclubs," Mamuka Chelidze, head of the criminal police department, told a news conference.

Dozens of armed police officers were deployed in the raids. Clubbers said police used unnecessary force in their operation.