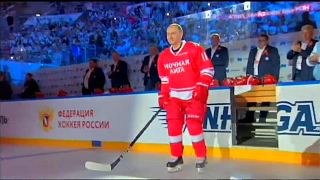 Russian President Vladimir Putin took to the ice on Thursday in Sochi and, with a little help from a team of retired hockey legends, scored five goals.

The president made an appearance at the seventh Russian National Amateur Ice Hockey Teams' Festival, which was held in Sochi's Bolshoy Ice Dome.

The festival's main prize, along with the "Krutov" trophy, was the chance to play against a line-up of retired Russian hockey legends, along with president and Russia's acting defence minister Sergei Shoigu and other top officials.

The Night Hockey League was founded at Putin's initiative in 2011 and aims to promote the sport in Russia.