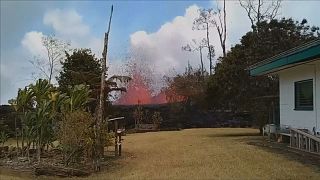 Keith Brock, a resident of Hawaii's Leilani Estates which has been engulfed by lava, returned home to collect his belongings on Sunday (May 6) to find spewing, red lava outside his backyard.

Brock filmed the lava fountain from where he stood about 30 yards away and shared his footage on his Facebook page.

"The sound was deafening, like 100 freight trains," Brock told Reuters. "The ground was bouncing up and down, it was hard to hold the camera still."

His house was one of around 35 homes and buildings destroyed by the erupting volcano.

Leilani Estates, some 12 miles (19 km) from the volcano, was evacuated due to the risk of sulphur dioxide gas, which can be life-threatening at high levels.