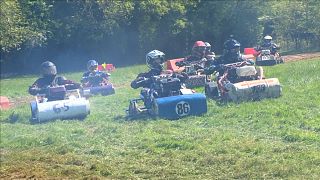 Lawnmower racing season kicks off in the UK

The lawnmower racing season began on Sunday in West Sussex, UK, with competitors keen to get their quest to be British champion off to a good start.

With a Formula One-esque scoring system — 25 points for a win — racers had the chance to compete for a maximum 100-point weekend with four races across each group.

The Reservoir Dip circuit proved challenging with the ground soft and muddy in places due to rain prior to the bank holiday sunshine.

All blades are removed from the lawnmowers for safety reasons with the season running from May to October.