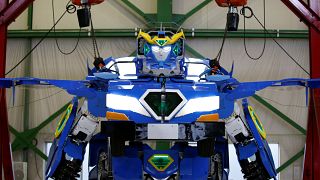 It's been an eventful week as Friday saw history made on the Korean peninsula with North Korean leader Kim Jong-un and South Korean President Moon Jae-in pledging "complete denuclearisation", and paving the way for the official end to the Korean War after 65 years.

Violent protests in Nicaragua over pension cuts led to three deaths, according to police. An officer, protester, and pro-government activist were killed in clashes in Managua.

On Tuesday, thousands of people gathered in Yerevan to lay flowers in commemoration of the mass killings of Armenians by Ottoman Turks a century ago.

Staying on the topic of the royals, a savvy designer in New Jersey is trying to cash in on the economic windfall that is the upcoming wedding between Prince Harry and his American bride Meghan Markle with two dolls dressed up as the couple.

The long winter is finally over in Sweden, where reindeer herds have started moving uphill in Jämtland province, to their summer pasture.

Japanese engineers unveiled on Wednesday a robot that transforms into a car that can actually carry people on board.

Tired of Wall Street, American lawyer Nathan Sawaya turned to lego and built a new life as an artist with his superheroe creations going on display in Paris on Sunday.

A solar-powered Zephyr balloon took to the skies above Clermont- L'Herault in France with two pilots on board. The pair are seeking to break the world record with the longest manned flight, lasting 30 days.