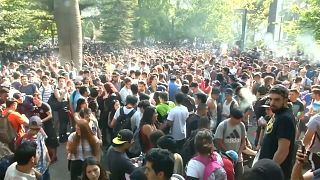 Mexicans light up at marijuana festival

Hundreds gathered in Mexico City on Friday (April 20) to join international celebrations of marijuana. Participants met at a park early in the afternoon and prepared joints and pipes and other devices to light up.

In 2016, President Enrique Pena Nieto backed a bill to allow Mexicans to carry an ounce of the drug, but the measure stalled in Congress.

Thousands turned out in a Santiago Plaza on Friday (April 20) to smoke marijuana and call on lawmakers to loosen restrictions.

Participants defended marijuana smokers and made their case to lawmakers to continue broadening laws.