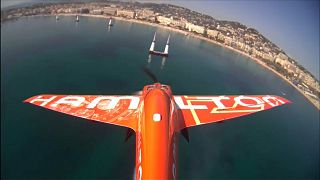 Goulian, who won the first leg in Abu Dhabi in February, set a new track record with a time of 57.0673 seconds ahead of compatriot Kirby Chambliss, while Australian Matt Hall finished third.

Germany's Matthias Dolderer came fourth, and was closely followed by Mika Brageot and reigning world champion Yoshihide Muroya as the top six pilots finished within four-hundredths of a second of each other.

Martin Sonka and Ben Murphy were both disqualified for exceeding the G-limit and found themselves at the bottom of the leaderboard.