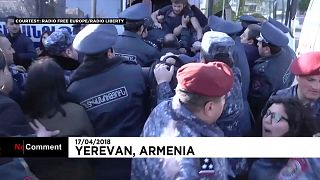 Armenian opposition groups say around 30 of its supporters were detained when police tried to break up a protest.

Opposition supporters tried to derail a vote in the Parliament set to give the country's former president Serzh Sargsyan the post of prime minister.

Several thousand people blocked traffic on Tuesday morning in the capital of this former Soviet nation, camping out on the streets to protest a change of government that they see as a fig leaf by the ex-president to stay in power.

Sargsyan, who served as Armenia's president from 2008 until earlier this year when he stepped down because of term limits, is set to be approved as prime minister on Tuesday. He will operate under a new political system that sees the president's powers weakened and the prime minister taking a dominant role