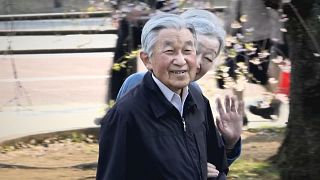 Japan's Emperor Akihito and Empress Michiko took a rare stroll around the Imperial Palace on Sunday morning, admiring the cherry blossoms along the way.

The couple stepped out of the Imperial Gardens' Kitahanebashi-mon gate and walked to the Inui-mon gate, about 200 meters away, as they looked at the blossoms.

Flowers on Somei-Yoshino cherry trees have already passed their peak, but weeping cherries are in full bloom.

This is the first time in a year that the Emperor and Empress have taken a stroll at the Imperial Palace, and their appearance was met with surprise by people jogging nearby.