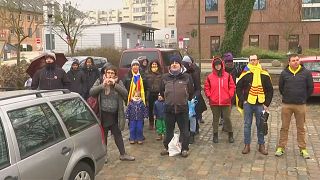 Catalan flags were tied to the fence outside the building while the protesters gathered to sing the Catalan anthem. Some of the demonstrators tried to deliver parcels to Puigdemont, one containing Easter chocolate, another with stationary and stamps, but both were turned away by the prison.

Some other Spaniards also drove by, if only to take a picture with the Spanish flag in front of the prison.

A German court in Neumuenster said Monday (March 26) it was likely to take several days to decide whether to extradite Puigdemont to Spain to face rebellion charges over the region's campaign for independence.

Catalonia's parliament said on Wednesday (March 28) it supported Puigdemont's right to again lead the region while he awaited the German extradition ruling.