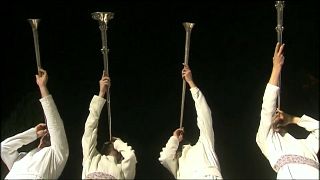 A group of far-right Jewish activists gathered on Monday near Jerusalem's holiest site, known to Muslims as the Noble Sanctuary and to Jews as Temple Mount, to take part in the annual re-enactment of an ancient Passover sacrifice ceremony.

The atmosphere was festive when the men, dressed as white-robed priests, took to the stage to perform what they believe were ancient Jewish Temple-era rituals.