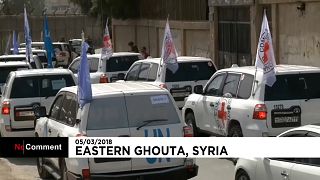 Desperate for food and basic medicines, many of the besieged and bombarded Syrian civilians in Damascus' eastern suburbs of Ghouta waited on Monday for a 46-truck convoy organised by the United Nations and key aid agencies to arrive in the rebel-held enclave.

The convoy travelled via the Al-Wafideen crossing from Damascus into eastern Ghouta and was also carrying UN and International Committee of the Red Cross personnel. According to the UN, it reached the town of Douma in eastern Ghouta.

The UN's humanitarian office said its supplies could provide food and medicine for 27,500 people. However, 70 percent of the planned health supplies intended for Douma were not allowed to be loaded and not permitted to be replaced with other life-saving items.

The delivery is the first aid shipment to enter the area since a Russia-ordered so-called humanitarian pause went into force a week ago.

It was also the first to the region in nearly three weeks and the first to Douma, the largest and most populated town in eastern Ghouta, since November.