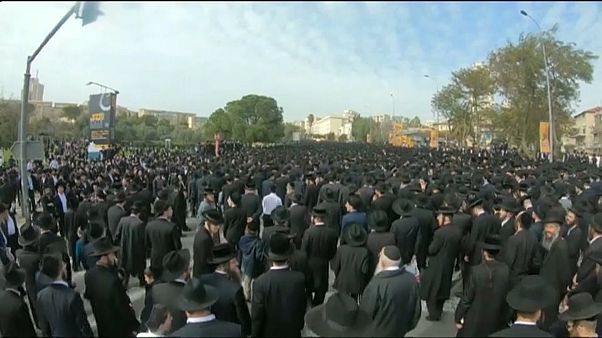 Thousands of ultra-Orthodox Jews crammed into the streets of Jerusalem on Sunday, (February 25), to mourn an 86-year-old sage, the head of an ultra-Orthodox group known as the Jerusalem Faction.

Rabbi Shmuel Auerbach headed an offshoot of the ultra-Orthodox community, He fiercely objected to the recruitment of ultra-Orthodox soldiers to the Israeli army, He passed away in Jerusalem on Saturday, (February 24), after suffering a heart attack.

Auerbach's followers have frequently clashed with Israeli police in nationwide protests against military recruitment and after the arrest of prospective army conscripts from their community who ignored their callup papers.

Although most ultra-Orthodox seminary students gain exemption from military service on religious grounds, they must obtain their exemption through a conscription procedure. Auerbach's group has refused even to acknowledge this formality.