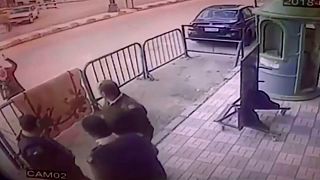 Three Egyptian policemen saved a five-year-olds life as he fell from a third-floor apartment in the southern city of Assiut.

The video was released by Egypt's Interior Ministry showing the three policemen guarding a bank.

The ministry revealed in a statement that the child was unharmed but one policeman was injured and received treatment in a nearby hospital.

The policemen were hailed as heroes in the Egyptian media.