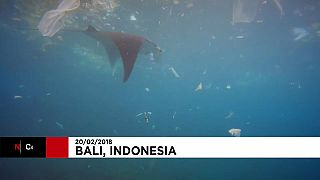 A Manta Ray has been filmed swimming through plastic bags and other rubbish as it searched for food off Manta Point on the Indonesian island of Bali.

Environmental charity Greenpeace estimates nine billion metric tons of plastics have been produced and spread around the world since the 1950s.

But very little has been recycled and over seven billion tonnes remain lodged in our environment, both on land and in our oceans.

Pieces of plastic are now routinely found in the stomachs of dead fish, turtles, and marine mammals, Greenpeace says.