European banks are safer today because they have to follow a single rule book.

Since we have a banking union, there needs to be a European solution.

The next step is to put a safety net in place so that, if there is big trouble, the taxpayer is not the first on the hook to bail out the bank.

So, what could a European backstop mean for taxpayers?

Let’s start by looking at what’s changed since European banking union rules were introduced after one of the continent’s worst financial crises.

Euronews went to Italy to find out.

The financial crisis might be over in Italy but deep wounds remain and judicial inquiries and trials are still ongoing.

Between 2013-17, seven banks had to be saved, three were recapitalized and bailed out, and four were bailed in.

Hundreds of depositors lost their money, unaware that, on their bankers’ advice, they had invested their cash savings in risky bonds.

In addition to the money lost by investors, public resources used for the bailouts have been recorded as public debt, for a total of between 1 and 2 percent of Italy’s gross domestic product.

Where savers didn’t lose money, taxpayers had to pay up.

“The Italian saver is not well informed, he struggles to take a role in the request for information; therefore, fundamentally, fear has increased, but not the behaviours that could help eliminate or reduce problems”.

Everyday savers still need to rely on their bank or financial advisor because, in most cases, they simply don’t have the necessary knowledge to invest by themselves. This makes it critical to have a regulatory framework that clarifies who is responsible for intervening when there is a problem.

“Certainly, from the point of view of general investors, it would be desirable to know, at least ex-ante, who’s going to take care in case of similar problems in the future and under what conditions,” says economist Riccardo Rovelli. “So, it is important in the future, I think, to be able to distinguish between bank liquidation done by national authorities and bank resolution done by European authorities”. 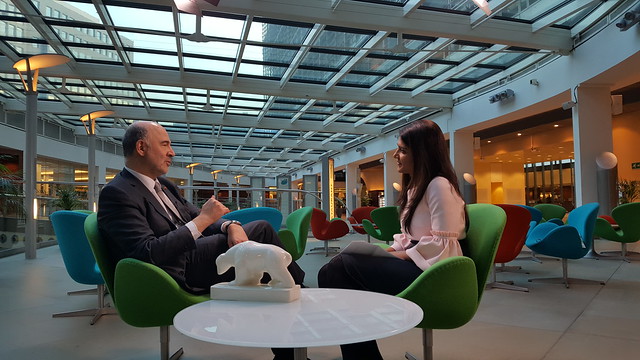 This single rule book of clear and common principles is grounds for optimism, Borettini says, if we are faced with another financial crisis.

“I am extraordinarily optimistic. I think the works of the European Banking Authority, of all the bodies in charge, are moving forward with great efficiency. They will accompany digitization, innovation, in European terms, in an absolutely positive way”.

The system is a lot safer than it used to be: European banks have a lot more capital for the bad times and they are also healthier, with fewer bank loans on the books.

But what happens when even the current rules are not enough to stop a bank from failing? That’s where the idea of a common backstop comes in.

Since the financial crisis, Europe has been building a banking union for its citizens to make banks more stable.

But the third isn’t there yet.

Today, if bad weather strikes, a single resolution fund made up of contributions from banks can stabilize the situation to an extent.

But in really bad weather that fund may not be enough and would need last resort support.

This would come as credit from the European Union via the resolution fund to the country most at risk.

It would be funded by both eurozone and non-eurozone countries participating in the banking union.

But the people who really own the house, the taxpayers, could still be protected since any backstop money used during the crisis would be repaid by the banks.

Ideally, a backstop should be built up while conditions are sunny and bright.

The European Central Bank, which serves as the single supervisor of our banks, says that the risk reductions in place so far are essential to protect the taxpayer. However, the consequences of potential bank failures are still national, and therefore still the responsibility of the taxpayer.

He began by comparing a deeper economic and monetary union to a bear: The eurozone and the European Monetary Union (EMU) are solid and robust, he explained—but they can also bite.

Moscovici: We have already all the security tools, almost all of them. But we don’t have yet the capacity to dynamise our economy. If there is a backstop, it means that, if the immediate solutions don’t work, in the end you’ve got financial, budgetary support that avoids that the risk of banking failure is too high.

euronews: But that means taxpayers are still on the hook for a bailout?

Moscovici: The backstop is budgetary—it’s based on the (European Stability Mechanism). Since we have a banking union, there needs to be a European solution.

euronews: How have, in your opinion, the solutions we’ve found from the banking union helped a normal citizen at home?

Moscovici: First, the bank balance sheets are much better than they used to be And when there is a difficulty, then there is discussion between the (European) Commission and this or that bank. It happened for Italian banks, for example, or Spanish banks. So we could avoid the systemic risk. And we were able to anticipate and find solutions, and so there has not been bank failure.

euronews: Would this backstop work even when it has been decided that a certain bank doesn’t have an impact on the eurozone economy or other eurozone banks? What happens at that point? Would it then go back to national authorities?

Moscovici: First of all, let’s establish the backstop—it’s not yet there!

euronews: Tell me what you think could work.

Moscovici: First things first. You know, my experience is that we need to move step by step. I don’t want to elaborate; I think it’s up to the ministers now to take their decisions and there is a proposal from the Commission on the table.

3. The Commission thinks it can integrate the #ESM in the EU treaties without a fully fledged treaty change; but the European Parliament will have to give its consent to the regulation turning the #ESM into #EMF.

euronews: What has convinced people to start moving toward that?

Moscovici: I think the ministers are still divided, of course, but well aware. When Paris, Brussels, Berlin are, I wouldn’t say aligned, but are moving in the same direction, things become possible.