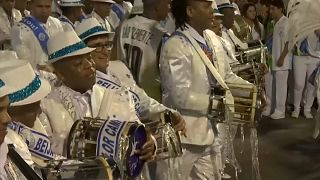 As Brazil emerges from one of its worst recessions in recent history, Rio de Janeiro's traditional Champions Parade took on a distinctly anti-establishment tone.

Samba schools took over the city's Sambadrone on Sunday to deliver messages against slavery, which campaigners said continued to exist in parts of Brazil.