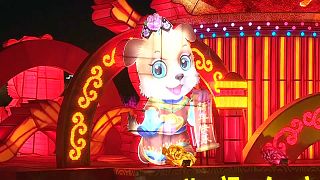 Annual Spring Festival lantern shows are being held across China in celebration of the Lunar Year of the Dog, which falls on Friday.

Lanterns in various shapes and sizes lit up the ancient city of Xi'an in northwest China's Shaanxi Province. The lanterns with designs featuring local culture attracted large crowds of visitors.

In Rongchang District of southwestern Chongqing Municipality, a dog-shaped lantern was set up in front of a train station to greet the returning citizens.

Lanterns shaped like the district's intangible cultural heritages of folding fans and pottery wares were also on display in the city.

"The lanterns have added so much festive joy. Now I can clearly feel atmosphere of the Spring Festival," said Mr. Tang, a local citizen.

"There are a lot of colorful ribbons and lights on trees, and that has really brought a Lunar New Year atmosphere," said Wang Hongjie, a local resident.

Lantern sets were also seen at the ancient city of Datong in north China's Shanxi Province.