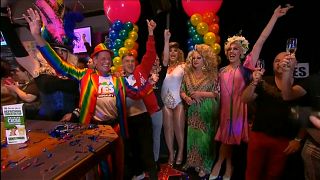 Australians have voted overwhelmingly for same-sex marriage, paving the way for legislation by the end of 2017 as supporters celebrated on Wednesday, (November 15).

Senator Penny Wong was overwhelmed as she and fellow senators listened to the result in Canberra, while in Sydney storied swimmer Ian Thorpe admitted he was nervous about what the result would be.

“Yeah, I was nervous today because for me it was something that I was really kind of anxious about this result, because it is such an important outcome for so many people right across the country and really just wanted to get it right today,” said the former Olympic champion.

In Melbourne, opposition leader Bill Shorten celebrated with the LGBTIQ community. Australian Prime Minister Malcolm Turnbull, under pressure amid a citizenship crisis that has cost him his deputy and the government’s majority in parliament, finds his leadership tested again as the marriage equality bill enters parliament.

“The decision of the public should be respected by the parliament but I think it’s also very important that quite legitimate concerns that were raised by many people including me and my friend and former deputy prime minister John Anderson about the protection of parental rights, religious freedoms and freedom of speech. These are not small matters, it is a pity that the government as I asked had not spelt out before the vote, how these matters were going to be covered in any enabling legislation,” he warned.

The conservatives’ planned amendments to the bill would allow private businesses to refuse services like wedding cakes for same-sex weddings by objecting on religious grounds.

Australia will become the 26th nation to formalize the unions if the legislation is passed by parliament, which is expected despite some vocal opposition within the government’s conservative right wing.