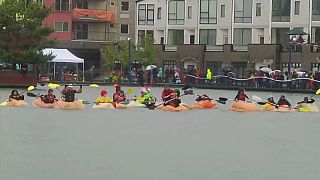 US paddlers brave the rain for pumpkin paddle race

For giant pumpkin growers in the small Oregon city of Tualatin, competing on who can grow the heaviest squash wasn’t enough.
So 14 years ago, inspired by their counterparts on the US east coast, they began a paddle race.
Every autumn now, after the largest pumpkin is crowned, the growers carve out their prized squashes, save the precious seeds and test their buoyancy.
The result is four races: one for growers and others for sponsors, police officers and firefighters and members of the public who are chosen through a lottery.
This year, despite heavy rain, thousands of people watched the races on Saturday.
Many of the paddlers wore costumes, depicting Wally (known locally as Waldo) of Where’s Wally, Captain America, Santa Claus and others.